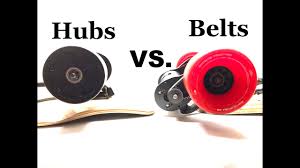 There are a lot of written and talk about wheels and belt drive skateboards – I don’t want to bother you.

The first word to say: the hub and the belt-driven skateboard are all dependent on the brushless motor. Typically, these motors are either directly part of the wheel (“hub” drive) or placed under the deck of the skateboard with a belt that connects the motor to the wheel (“belt” drive). Initially, all electric skateboards were belt driven. The first electric skateboard with hub motor entered the market in early 2016. Since then, wheel technology has evolved, but the belt drive system seems to be more mature.

Belt drive is the most traditional powertrain. It connects the wheels to the outer rotor motor via a belt and gear belt system. As a proven powertrain, it has always been the preferred power train for eskate builders and a major player in the world of electric skateboarding. Boosted, Evolve, and Metroboards are all based on belt drives.

The belt drive system limits free rolling because a large amount of drag is added due to the pulley, which makes it more difficult to push. Maintenance around the belt drive, such as belt replacement due to wear or tear, belt tensioning and belt alignment may also scare people who are not necessarily mechanically inclined.

In general, belt drives provide better torque than hub systems of the same price. They also allow the use of full length plate wheels instead of thin PU sleeve hub motors. This also allows for more wheel selection exchanges. In addition, some people like to get more creativity in the department by getting ideas through their settings and belt drives.

For each hub motor, you can expect even better ride comfort, and you will lose the standard long wheel and the accompanying urethane. The thinner the polyurethane sleeve, the worse the shock absorption and the worse the driving.

At similar power input levels, hub motors also tend to have less torque or braking power. In addition to professionally designed hubs such as the Hummies and Enertion hubs, the gears in this sector are much better than the drivetrains.

Last, there is a list that is about the pros and cons between the hub drive board and belt drive board.

All in all, Both belt motor and hub motor has its advantages and disadvantages. The belt motor is powerful, but it is noisy and requires frequent maintenance. There is no noise in the hub motor, but the power is not particularly good. You can choose a suitable electric skateboard according to your requirements and hobbies.